What I always used for my configuration through copy-paste from various sources is presented next but the only changes I made to it was when it crashed. Now that I have amdgpu finally working with all of the associated bling, I decided to review the performance situation.

Turn it on and off again#

During these benchmarks I kept normal activity on the screen and an 1080p 8 hour youtube video of a fireplace on 1/4 of the screen. This firefox window was also supposed to be used for the partial update benchmark but --benchmark-wid simply refused everything I threw at it so I decided to postpone such test to a later date.

The benchmark used will be the following to simulate full screen repaint. vblank_mode is set to 0 to disable AMDGPU’s default vsync.

First thing I did was to remove all backend options except the backend glx to get a baseline then add vsync to check if it impacted performance.

Time in seconds to repaint the screen 5000 times 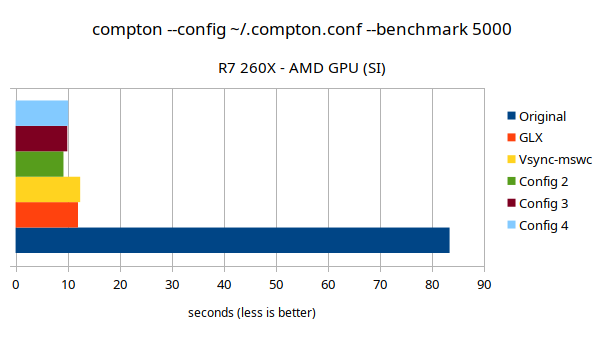